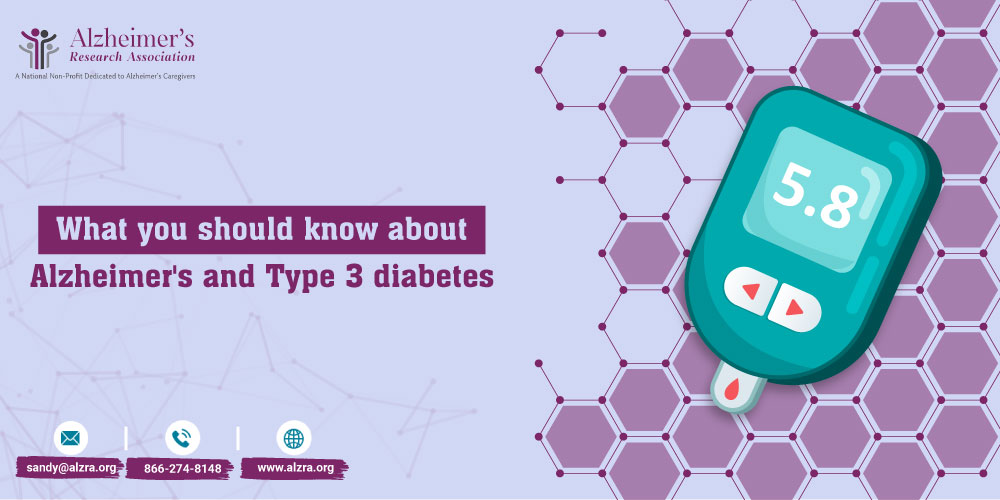 Diabetes mellitus (DM) is a health condition in which the body does not produce enough insulin (a hormone responsible for blood sugar regulation in the body) or cannot effectively use it, resulting in abnormally high blood sugar (glucose) levels. Generally, three types of diabetes are known:

Some researchers have proposed the term “type 3 diabetes” for describing Alzheimer’s disease. According to them, a type of insulin resistance and insulin-growth factor dysfunction that occurs specifically in the brain cause amyloid plaques, inflammation, and oxidative stress in the brain triggering the disease. Some scientists also use this term when people with type 2 diabetes are diagnosed with Alzheimer’s.

“Type 3 Diabetes” is not universally acknowledged by the medical community as a clinical diagnosis. Its classification is highly controversial, and the American Diabetes Association and other major health organizations do not consider it a type of diabetes.

This condition is not to be confused with type 3c diabetes mellitus (also known as T3cDM and pancreatogenic diabetes). Type 3c may result due to pancreatitis and is entirely different from Alzheimer’s.

In a review published in 2008, the authors conclude that “type 3 diabetes” precisely describes Alzheimer’s disease as a form of diabetes that impacts the brain. According to them, Alzheimer’s is a neuroendocrine disorder characterized by decreased insulin and insulin-like growth factor (IGF) signaling. It can also cause oxidative stress and inflammation in the brain. Besides, the authors note that while obesity and type 2 diabetes may contribute to the development of dementia, they are not sufficient causes in and of themselves.

A more recent study, however, reveals that an insulin-degrading enzyme may cause type 2 diabetes to progress to type 3 diabetes by shifting metabolic pathways. This mechanism may result in oxidative stress and beta-amyloid buildup in the brain, both of which are symptoms of Alzheimer’s.

Another study stated that people with type 2 diabetes might be about 60% more likely to develop Alzheimer’s or any other type of dementia, suggesting type 2 to be one of the risk factors.

Potential risk factors for type 3 diabetes, as mentioned in a recent study, include:

Inheritance of the APOE-ε4 gene is one of the most substantial risk factors for Alzheimer’s disease. Research has also suggested a stronger association between diabetes and Alzheimer’s-associated amyloid pathology among the carriers of the APOE-ε4 gene, implying that this gene can increase an individual’s risk of the condition.

Since “type 3 diabetes” is not officially classified as diabetes, medical practitioners do not use it as a diagnostic term. Its symptoms are similar to dementia which include:

No specific test can diagnose type 3 diabetes. However, doctors can diagnose Alzheimer’s via brain imaging, neurophysiological tests, and neurological examination.

Currently, Alzheimer’s has no treatment, and the available medication can temporarily treat its symptoms or slow its progression. In case a person has both Alzheimer’s disease and type 2 diabetes, treating the latter is essential to help slow dementia progression.

Traumatic Brain Injury (TBI): Can It Cause Dementia?