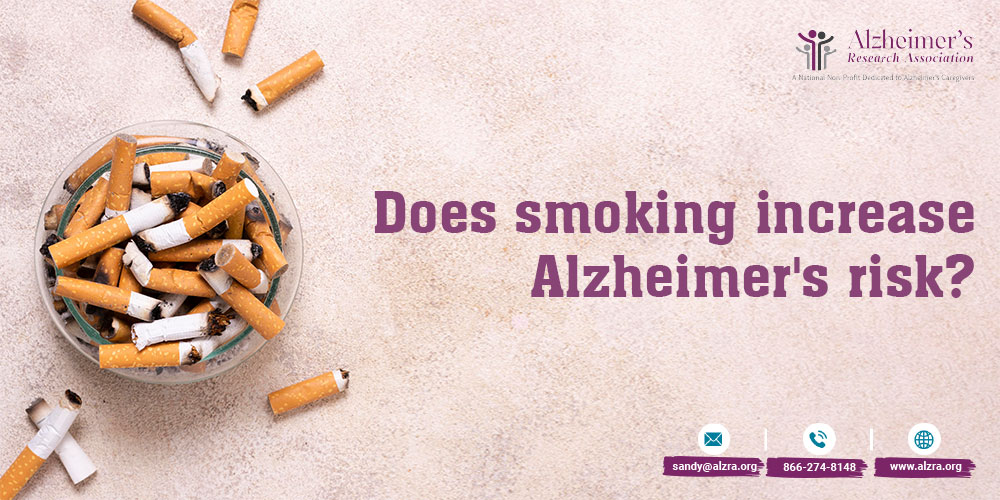 It is a well-known fact that smoking damages the heart and lungs. However, smokers and medical professionals intermittently pay less attention to how it can damage the brain.

Smoking is quite prevalent in the US and worldwide. Recent data indicates that approximately 8 out of every 100 Americans over the age of 64 currently smoke tobacco. Strangely, this is less than twice as high (16%) smoking rate among US individuals aged 45 to 64. Why is that so? That is because smoking (the leading cause of preventable disease and death in America) causes earlier death. Former smokers are no longer counted in statistics once they have died.

The link between smoking and dementia

We know that smoking causes heart and lung problems, but how does it relate to dementia? The WHO Knowledge Summary on Tobacco and Dementia has explained various reasons for this link. These include the correlation between the two most prevalent types of dementia, Alzheimer’s and vascular dementia, and issues with the vascular system (your heart and blood vessels).

Smoking is known to increase the risk of vascular problems, such as strokes or small bleeds in the brain, both of which are risk factors for dementia. Toxins in cigarette smoke also cause cell inflammation and stress, which may lead to the development of Alzheimer’s disease.

What are the research findings?

With all the harm that cigarette smoking causes to a person’s health, some people think that smoking decreases the risk of dementia. This misinformation, however, is due to some early studies that reported that smoking lowered the possibility of Alzheimer’s disease. Later reviews suggest that these studies were biased due to the researchers’ affiliation with the tobacco industry.

According to WHO, smoking may be responsible for 14% of Alzheimer’s cases worldwide. An analysis of 37 different studies suggested that current smokers are 30% more likely to develop dementia and 40% more likely to develop Alzheimer’s. Furthermore, the study found that smoking 20 cigarettes per day increases the risk of dementia by 34%, implying the more a person smokes, the greater the risk.

The World Alzheimer’s Report 20145 analyzed the results of seven systematic reviews in addition to conducting its analysis. In the evaluation, which comprised 14 studies, the researchers discovered that current smokers had a noticeably higher risk of dementia than nonsmokers.

The 2020 Lancet Commission on dementia risk also highlighted smoking as one of the twelve modifiable risk factors. Overall, comprehensive reviews have determined that smoking increases the incidence of dementia by 30–50%.

How does smoking increase Alzheimer’s risk?

Smoking’s harmful effects on the blood arteries in the brain are likely related to its damaging effects on the brain. Homocysteine, a blood chemical detrimental to blood arteries, circulates in higher amounts due to smoking. Higher homocysteine levels may increase the risk for dementia and stroke. Atherosclerosis damages the arteries of smokers at an earlier age, which is very harmful to the brain because it depends on blood flow for nutrition and oxygen.

Additionally, smoking has a link to increased oxidative stress, a negative impact that causes increased inflammation and brain cell death. Smoking is also an additive risk factor, increasing the risk already brought on by other health conditions. Individuals already at increased risk for dementia due to having the ε4 variant of the APOE gene face an even greater risk if they smoke.

Researchers also warn about the dangers of second-hand smoke exposure. Although not as harmful as direct exposure, one study found that second-hand smoke increased dementia risk by more than 25%, with longer duration and greater frequency of exposure carrying a higher risk.

Does the amount smoked influence the dementia risk?

The World Alzheimer’s Report included only four studies that examined the number of cigarettes smoked and dementia risk. Two studies found a connection between higher tobacco consumption and an increased risk of dementia, but there isn’t enough evidence to know for sure.

Since smoking is a modifiable risk factor, quitting may benefit brain health. Current smoking is associated with an increased risk of dementia, particularly Alzheimer’s and vascular dementia, and smoking cessation is a risk reducer. Therefore, quitting smoking and adopting healthier lifestyle choices can reduce the risk of dementia.

Games and Activities for Dementia Patients